October 29, 2015
I'm thrilled to welcome fellow writer Marie Piper to my blog today. We have a few things in common, we shared a release day and our stories both have cowboys. Her new release Haven's Flame is the first in a series and a historical, sexy romance set in the Old West. It sounds like a great escape on a cold fall evening. It's available now on Amazon. To get to know Ms. Piper better, I asked her a few questions.


What is your process for plotting out your novel?

First, I free write. I’ll do this for a few weeks, jotting down ideas and scenes in a notebook I carry around. Next, I’ll use those scribbles to create a rough outline of the story and start filling in the blanks – what is missing? What needs to be elaborated? By the time I’ve filled out those scenes/characters/moments, I generally have a good grasp of the story or book, so it’s pretty easy for me to complete a first draft from there.

Also, as soon as I reach the point where I’m building chapters, I’ll start sending chunks of the book a chapter or two at a time to one of my best friends, Aleisha. She’s my Beta Reader, and great at telling me when things are working, and when they’re not. She was instrumental in my writing process for Haven’s Flame, and I can’t wait to get her feedback on the things I’ve written for the second book in the series….

Well, I’m the mom of a noisy, curious, adorable and smart four year old. Most of my writing takes place while he’s in his classes, or once he’s gone to bed. I’ve had to learn how to cram a lot of writing into short periods of time. I’m still working on it.

I consider myself a writer of romance and erotica. Sometimes the line between the two genres is blurry. Much of my stuff is Western-based. I’m a huge nerd for the Old West. However, I have several pieces coming up in some anthologies over the next few months, and quite a few of them are contemporary, and two are even paranormal-focused.

I’d been tinkering with the manuscript for Haven’s Flame, and submitted it some places and got some good feedback. Then I took part in a Twitter pitch event and that’s where Limitless came on my radar. Once I’d signed with them, things moved quickly and efficiently and boom – now I have a real book!

Write what you like to write, and what you like to read. Westerns aren’t everyone’s cup of tea, but they’re mine, and it’s a fun gig every time I get to sit down and write because I’m doing what I love. 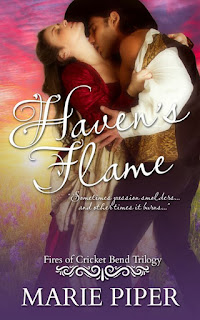 Marie Piper earned her B.A. in English Literature from Michigan State University, and lives in Chicago.  She loves travel, coffee, and surrounding herself with her book hoard. Marie has several short pieces of romantic/erotic fiction being published in anthologies over the next few months, and recently launched her steamy Western series, FIRES OF CRICKET BEND, with Limitless Publishing.